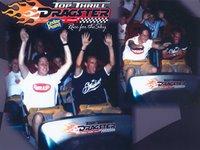 Well, we got back from the point on Monday, and it was a freakin’ blast. Where to start.

John Kelly and I started are drive through hell on Thursday night at 7:30pm. Ya know that red stuff you see on the radar when watching the weather? Well we drove right through something like that. And because we were driving East, we couldn’t wait it out. Well after 11 hours of driving, switching drivers while the other slept in the back of the Exploder, we finally made it to our destination.

First things first, where are the floating internets? We hit up Panara because they always have free floating internets, and plenty to go around of course. We then met Victor and Jamie at Meijer. It was really great to see both of them, seeing as I only see them 3 days a year if that.

We started on Magnum as usual. A great rough coaster that gets me every time. Proceeded to the usual suspects: Raptor, Millie, G-mini.

That night we played glow-in-the-dark frisbee on the beach in front of Breakers. It was one of the highlights of the trip for sure. We got a few comments from people walking by. After that we pretty much crashed in our smoking, room without a view at Breakers. I will say that Breakers is totally worth staying there. You can walk to the park and everything.

The next morning, we went to McDings (as John calls it) to get some breakfast, and then Jamie had to go to her wedding. When we were driving to get Jamie’s car in the Soak City Parking lot, we saw a group of seagulls in the middle of the lot so I floored it towards them and ended up hitting one. Damn flying rats!!! Right before Jamie left she said, “I’m gonna run it over.” We thought this was all pretty funny. But little did we know she would be going to hell forever. As we drove by it, the bird was still alive. Victor was trying to stop Jamie. It was all slow motion. Jamie, white knuckled, heading towards this suffering bird.

Victor said that we had to top the Seagull story somehow on this trip. And we did. This is how it all went down.

The last day, John was getting a little exhausted because Victor and I are so hardcore, so Vic and I set out to ride dragster one last time. We waited in line for about 45 min when it started to rain. After the rain had really started coming down, and everyone else in line had left, we were up for the first train when the rain let up. We were kinda bored so I called Jamie, to find out that she was going to work at CP next year. After this, Victor and I had a serious talk about this. We were both considering it a great deal. After the rain let up, we were loading into red train (my fav train) when the ride op had said that Cedar Point was just voted the #1 Amusement Park in the World for the 9th year running.

After we were pushed into launch position by the maintenance crew, we were discussing the odds of getting a roll back, given the weather conditions, the wetness of the track, and the fact the ride hadn’t been run for a while, we thought this would be it. Right before we launched, I turned to Victor, “If we get a rollback, I’m workin here next year.” The catchcar caught, breaks went down, the x-mas tree lit up and we were off at 120 mph. When we got to the top, of the tower, we just got over crest and I was thinking, “Damnit, we made it over.” But then…we stopped. Victor and I turned to each other, and I had never been that happy before. We were pretty ecstatic.

Three days goes so fast. As usual, it was pretty hard leaving the greatest park in the world, with the greatest people in the world. It is really hard to have some of your best friends live so far away. But who knows, me Victor and Jamie could be reunited for one last season at Cedar Point next summer. Only time will tell.